At the time of writing, over 500 million people worldwide are LinkedIn users. That’s a lot of people vying for attention in the same space.

However, if we dig down a little into how people use LinkedIn, we can see the opportunity to make contacts via the platform is pretty good. Of the half-a-billion people using LinkedIn, only three-million post content every week, meaning there’s plenty of space to stand out.

Let’s look into the stories of three businesses that did just that, and made valuable business contacts by posting content on LinkedIn.

Thomas Hayward: using video to stand out from the crowd

Video posts attract about three times as much engagement as text posts on LinkedIn. Assuming your objective is to engage contacts with yourself or your business, this means they are thrice as useful. 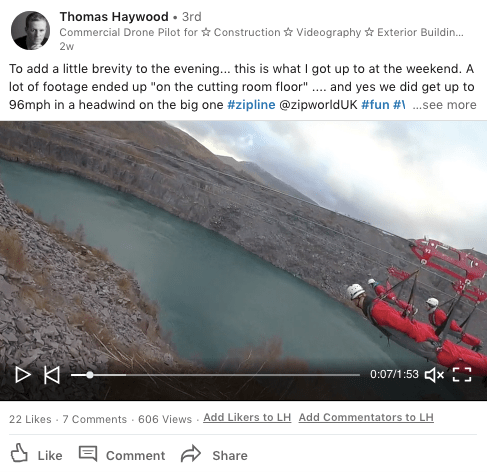 One exceptionally good exponent of LinkedIn video posts is Thomas Hayward, a videographer and drone pilot based in Edinburgh.

Hayward told LAMA that posting videos illustrating his work has helped him find clients on several occasions, sometimes generating as much as €3.500 in new commissions from a single post.

“One client I picked up was a big hotel and wedding chain, and there’s been smaller stuff here and there,” says Hayward.

“People see my work, and it’s a reputation builder. It’s not necessarily a quick earner; it’s something where people will become familiar with your work, and when they need something, they’ll think ‘he’s good, I’ll get in touch with him.’

According to Hayward, the key to standing out on business-focused LinkedIn is to give people content they’re not used to seeing there.

“It’s about taking opportunities to film things when you’ve been on a job and have wrapped up. For instance, if you look at my social channels, you’ll see I shot a video when I’d been refereeing a baseball game in Norway.”

Not everyone has the same video-making expertise or access to an interesting subject matter as Thomas Hayward.

Thankfully, it’s possible to create engaging videos of other types using no more than a smartphone. For more on that topic, see our article on Why video content matters.

LinkedIn can be an effective platform for driving new contacts towards “top of funnel” or “ToFu” content, meaning articles, videos and other content designed to capture relevant customers’ attention, without getting too salesy.

The mechanics of the process are simple: the business includes a link to their top of funnel content as part of a LinkedIn post, then LinkedIn users will hopefully click-through and read/watch the content.

One major company using LinkedIn in this way is HSBC. The banking giant has set up sponsored posts to reach prospective customers in middle-sized economies where HSBC is not yet well-known. In one campaign, HSBC used sponsored posts to promote externally hosted content to fast-growing companies with the intent to sell internationally – a valuable audience for the bank to engage. Over 40,000 interactions with HSBC content happened as a result.

Amanda Rendle, a senior marketer for HSBC, told LinkedIn: “It has driven a huge amount of interaction with [the HSBC content site] Global Connections.”

Stones Corner Hotel: an image can be worth 10,000+ engagements

Content marketing on LinkedIn isn’t just for pro videographers and multinational companies. As this classic case study proves, the business-focused social network offers scope for success on a low budget and with low technical requirements.

In 2016, the venue manager of Stones Corner Hotel in Brisbane made a simple LinkedIn post, challenging all-comers to think up a name for the hotel restaurant’s new burger. The post was made up of an image showing the burger, and some copy explaining the contest, which offered tickets to see an Australia vs. India cricket match as first prize.

A combination of eye-catching imagery, simple proposition and appealing reward made this post a zero-spend LinkedIn hit. Within just over three weeks, it had attracted over 2,500 likes and over 8,000 comments, dramatically increasing awareness of the Stone Corner Hotel brand, while raising the profile of the venue manager.

If your LinkedIn output is need of an upgrade, we can help. Find out how to produce a journalistic video interview series, perfect for LinkedIn, with LAMA App.