Ergonomics and digital user experience (UX) design are all about building things to suit users as perfectly as possible. While ergonomics deals with both digital systems and physical things like products and spaces, UX design is concerned with apps, websites and other digital user interfaces.

The two professions both focus on human factors – but do they take a similar approach? To find out, LAMA App asked the same set of questions to an ergonomist and a UX designer.

Zaheer Osman is the Founder and Director of Adept Ergonomics, an independent ergonomics consultancy which provides training, research, and product design services to a wide range of clients.
https://adeptergonomics.co.uk/

Josh Fry is a freelance user experience designer and consultant. He has worked on projects for organisations including Kia, Speedo and the Great Ormond Street Hospital Charity.
https://www.fryux.com/

Your job is all about people. How do you place humans at the heart of your process?

Ergonomist Zaheer Osman uses a variety of methods to bring human considerations into his work, with time and budget often determining which method can be used.

“Sometimes you’ll use more scientific observations from user testing, while in other cases you could be working based on your expert opinion,” says Osman.

“The more valid assessments and conclusions come from involving employees or customers – especially if you can involve a representative range of body sizes and shapes, experience levels with the item being tested, and so on. Factors like these can have an impact on experiences of a product, service or system,” he says.

UX consultant Josh Fry agrees with Osman on the importance of human involvement in testing.

“If we’re talking about standard or ideal process, a UX designer will do a bunch of user research upfront, especially interviews,” says Fry.

“Ideally you do some initial design exploration or prototyping, then you test with users at each stage. It’s a cycle of basic design, testing with users, improving and repeating.”

According to Fry, putting in plenty of UX work up-front can save website and app owners time and money in the long run. “That way, you don’t waste time coding something that doesn’t work,” he says.

Zaheer Osman says ergonomics is also best applied at the outset of a project: “It’s ideal to get in at the earlier stages of the design of a product or process, because once something has been built, it’s very difficult and costly to change.

“Unfortunately, a lot of clients engage ergonomists reactively, so they can retrospectively fix a situation,” he says. Where do you go to find out about new developments in your profession?

Zaheer Osman uses a mixture of academic reading and informal conversation with peers to stay abreast of the latest developments in ergonomics. “I look at what’s being done in research. Peer review journals have the most robust and valid trials,” says Osman.

“Academic research doesn’t always translate well into real world situations, so you have to look at what’s actually going on, and what are the most pragmatic case studies being produced.” he says.

“I also talk to colleagues to gain insights from their perspective.”

Josh Fry looks to online sources for much of his ongoing learning about digital UX.

“It’s a very fast-evolving field, and I get most of my input from Twitter communities and groups on Slack, where everyone’s talking about UX,” he says.

“A really valuable thing I picked up recently is the trend toward small batches of users in testing. There’s a guy called Paul Boag who’s got a really cool graph (here), showing how the number of users tested affects your ability to discover problems.

“After you’ve tested five or six users, you’ve caught the majority of things.”

Interestingly, Zaheer Osman recommends using a similar sample size in ergonomics testing. “Eight is a good number of participants. You can capture a good percentage of issues with that number of users,” he says.

What is the value of human-focused design?

“Lot of things are being designed – products, systems and environments – which are almost identical,” says Zaheer Osman. “Good design is a differentiator.”

He continues: “If you’ve got two similar products or systems and one is easier to use, quicker and more intuitive, it will be valued more highly.

“With the advent of products like the iPhone, and people understanding the impact of usability, it’s getting more value assigned to it.”

“People are very familiar with certain design patterns that provide speed and ease of use,” he says.

“Everyone expects everything to be nicely designed, and there’s no excuse for things to look crap, because lot of design problems have been solved.” 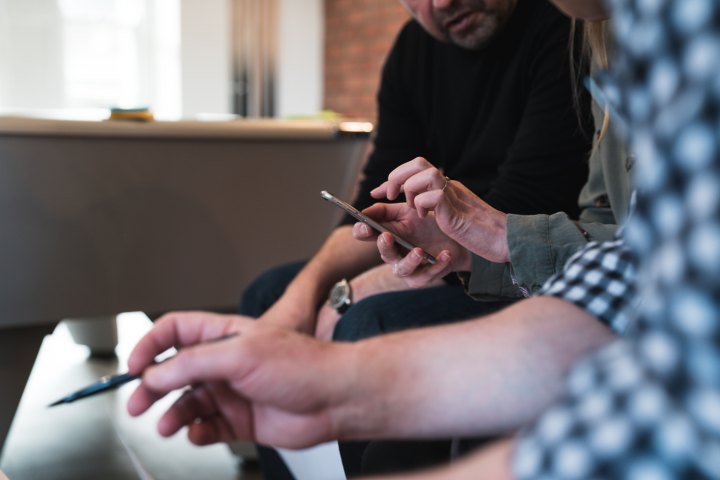 What is being a UX designer/ergonomist all about?

“The job of a user experience designer is to advocate for the user at every step of design and development,” says Fry.

“It’s a back and forth between designer and user, and the aim for the whole thing is to create an interface that reflects the cognitive model, so when people use it, it reflects what they have in their head.

“The filing system, say, is taken from real life – things inside other things. That begins to shape the mental model in return.”

According to Osman, the value of ergonomics lies in the combination of human satisfaction and business benefit it can provide.

“We think it’s important to keep people happy and interested, and give them a positive interaction,” he says.

“The driver, beyond safety, is getting a good experience of a product, and the value and competitive edge that adds to a brand.”

What’s the relationship between UX design and ergonomics?

We always expected there to be some overlap between Fry and Osman’s responses – but even so, the commonalities between the two professions are striking.

“The big one where ergonomics and UX combine is around the devices people are using,” says Fry.

“There’s a classic diagram showing the areas of a smartphone screen which are more reachable by the thumb. I consider that to be ergonomics. With bigger and bigger screens, reaching parts of the interface gets more difficult.

“Then there’s the matter of accessibility, which can get left behind in the digital space. For instance, some people with limited mobility are having to use keyboards instead of a mouse, so there’s a big push to include that in interface design.”

Osman seems to view ergonomics and UX as perhaps even more closely related than Fry does.

“The requirements of a UX research or designer are pretty much the same as those of an ergonomist, in terms of understanding what people need, and what’s needed to make systems better and more user-friendly,” he says.

“UX considers the impact of a thing on the user, and so does ergonomics.”

We hope you found this conversation as interesting as we did. If so, check out our Interviews section, where you’ll find hundreds of professionals offering insights into their work.

Want to be interviewed by a professional journalist? Step this way.